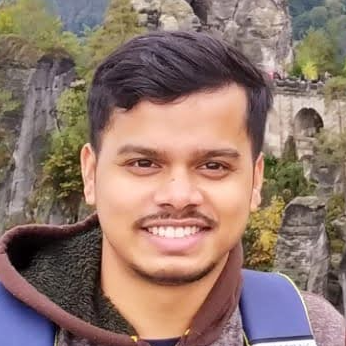 My name is Kuldeep. I come from a small town in southeastern state of Odisha in India.

I did my bachelor’s in Metallurgical and Materials Engineering at Indian Institute of Technology Roorkee in India. I was always fascinated by the application of nanomaterials in electronics. This interest drove me to join the Erasmus Mundus Master in Nanoscience and Nanotechnology program at KU Leuven in Belgium and TU Dresden in Germany.

I have worked on a variety of projects in the fields of water purification, energy storage, and device simulations. My initial projects focused on the growth and characterization of nanomaterials for specific applications. I worked on TCAD simulations to understand device behaviors in my internship at IMEC Leuven in Belgium in the summer of 2020. I am currently working in the lab of Dr. Helmut Schultheiss at Helmholtz-Zentrum Dresden-Rossendorf on characterizing spin dynamics at low temperatures using Brillouin light scattering microscopy for my master thesis. I like to learn new skills. In my free time, I practice Taekwondo, play chess, and write poems.

During my master studies, I developed an interest in the field of magnetic materials and their applications. I applied to SPEAR as it brought together brilliant minds from academia and industry to provide an indispensable platform for young researchers. I am excited to work in a creative and stimulating ecosystem of a young startup in technology like ANTAIOS. I want to work as a researcher on industry relevant problems. I hope to build a professional network in both industry and academia.

Thanks to its unique combination of sub-ns writing, potential infinite endurance, and non-volatility, SOT-MRAMs appear as the only credible candidate for fast memories replacement in the memory hierarchy (low level SRAM, latches).

In a functional memory, millions of bit cells must be operated, and inevitable device to device parameter distribution must be characterized and considered for chip design. Indeed, those tiny variations will lead to performance limitations as well as to various failure modes limiting the reliability of the memory.

To enable the design of reliable and high performance SOT-MRAM memories, it is mandatory to use a high-accuracy simulation model during the design phase. The accuracy and reliability of such model, and the capability to model multiple variations (device to device variations, stochastic behaviour…) are critical to enable proper interfacing of SOT-MRAM bitcell with CMOS control peripherals. Furthermore, the simulation must be fast enough and able to handle a large number of bits. Finally, this model must be fed with highest accuracy characterization data.

Such a reliable simulation model, perfectly mimicking characterization data for millions of memory cells, does not exist for SOT technology whereas it is a must-have for the future of the SOT-MRAM industry.

The overall objectives of this project are to:

To do this, the research project under the SPEAR project will involve:

Based on these findings, the student will develop a simulation model whose performance should mimic the statistically collected data. The time evolution of the magnetization resulting from the model will be compared to the real time evolution of the magnetization in actual devices collected by time-resolved electrical characterization during a 6-month secondment at ETHZ.

In the remaining time, the student will propose, based on the developed model (such as SOT-MRAM based TCAM), innovative circuits mitigating the performance limitations (specific to the SOT-MRAM technology) highlighted earlier during the project. This will be done in close partnership with the IC design group.

ANTAIOS is a young technological start-up created in January 2017 to develop Spin Orbit Torque (SOT) MRAM technology. ANTAIOS is a pioneer of SOT-MRAM technology, finding its roots in the Spintec laboratory where SOT was discovered and where the core patents of SOT technology were filed. ANTAIOS’ business model is to develop the technology, and then to license its intellectual property to major industrial companies, such as IDM and foundries. Currently composed of 14 people, the company is expected to reach between, 15 to 20 people in 2021.

Antaios has expertise in both the development and testing of SOT-MRAM devices and in the design of SOT-MRAM memory arrays and full integrated circuits (ICs). The Antaios R&D team is mostly devoted to technology development but has strong links to the IC design team.

ETHZ (Zurich, Switzerland), under the supervision of Pietro Gambardella.
Due to the specificities of their IRPs, ESR13 and ESR14 will carry out a single 6-month secondment.